how can you help

This codified law in the California Constitution places individuals who are found suitable for parole subject to the political profitability of the elected Head of State and how that will affect their re-election.

California is one of only four states that gives the Governor absolute Executive Power to reverse the decisions of suitability made by their appointed and senate-confirmed Commissioners of the Board of Parole Hearings.

PROPOSAL FOR GOVERNOR NEWSOM'S MORATORIUM ON THE EXERCISE OF PENAL CODE 3041.2 AUTHORITY

The Governor's authority under Penal Code § 3041.2 to reverse parole decisions made by the Board of Parole Hearings (BPH) creates a politically burdensome and time-intensive review process. By self-imposing a moratorium on his exercise of this law, the Governor could fully delegate parole decisions to his Senate-confirmed parole commissioners, who are trained to consider all relevant, reliable information, [1] and who meet with parole candidates personally and evaluate credibility first-hand. The Governor would retain the power to trigger review by the BPH in cases of particular concern under Penal Code § 3041.1. With these protections, a moratorium would pose no harm to the public safety.

At the same time, a moratorium would offer many benefits: it would allow the Governor to conserve executive resources and focus on an affirmative agenda. It would make the parole review process more efficient, with fewer redundant hearings. It would conserve judicial resources statewide, insofar as parole reversals create a basis for litigation. It would spare the Governor being caught between constituencies in opposition or support of parole in individual cases, allowing him to remain above the fray and place responsibility for such decisions with the BPH. And it would bolster public confidence in the rule of law, insofar as politics should not influence the public safety decisions meant to govern parole suitability. [2] In light of these considerations, we urge Governor Newsom to announce a case-neutral moratorium on his exercise of the parole reversal power in line with his moratorium on the death penalty.

The undersigned believe this action would be in the best fiscal interests of the citizens of California, would protect public safety, and support the tenets of restorative justice, all of which are crucial to our success as a society.

1 Including the commitment offense, criminal history, and evidence of rehabilitation, among other factors. Cal. Code Regs., tit. 15, § 2281, subd. (b). 2 Only a handful of states currently allow this type of Governor’s action, and in December 2021 the Democratic legislature of Maryland eliminated its governor’s authority to reverse parole grants, citing the same concerns about politicization. 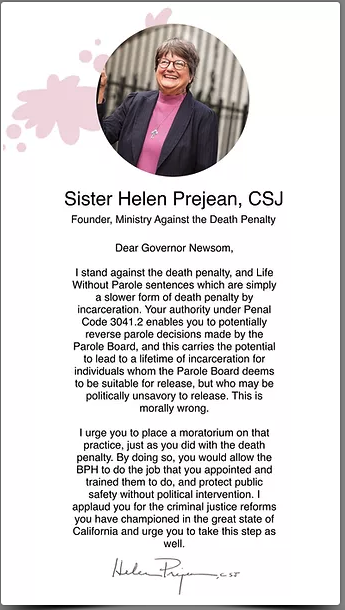 read more on how you can help reject penal code 3041.2