But what about Sirhan Sirhan's defense team?

Wouldn't all the conflicting evidence and eye-witness accounts have to be given to his lawyers, and then come out atrial?

Several factors worked against this. First, not all evidence was shared with Sirhan's lawyers. Even the autopsy report, whose conclusion of point-blank shots from the rear would seemingly exonerate Sirhan of RFK's actual murder, was not given to the defense until they had already stipulated Sirhan's guilt. The defense early on decide to pursue a" diminished capacity" defense, and the autopsy report didn't change that strategy.

It is important to understand the motivations of each side in the legal system's "great engine of truth." Neither side had anything to gain by bringing in evidence of conspiracy. For the prosecution, it would simply muddle what otherwise seemed a simple case. And for the defense, conspiracy implies pre-meditation, and thus knowing guilt. Introducing evidence of accomplices would not be helpful to their client.

Sirhan Sirhan was his own worst enemy at the trial, using it as a platform for expressing anti-Semitic political views and touting the Arab cause. Whether these issues were really motivation for a shooting he claims not to remember executing remains a mystery. 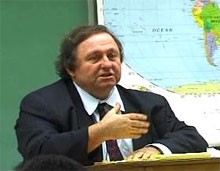 Finally, Sirhan's later attorney Lawrence Teeter uncovered evidence that Sirhan's lead trial lawyer, Grant Cooper, was compromised. Cooper was on one of the defense teams in the Friar's Club scandal case; one of the defendants in that case was none other than Johnny Roselli, who had been a prime participant in the so-called "CIA-Mafia plots" to assassinate Fidel Castro.  One day grand jury papers were found on Cooper's desk at counsel table, possibly planted there, perhaps by Roselli himself. Cooper faced a potential indictment over this incident, which could be grounds for disbarment, and the matter was left pending for the duration of the Sirhan trial. Afterwards, Cooper was let off with a $1000 fine.

Later, it would be discovered that the plot to assassinate Castro was aided by a CIA operative named Maheu. Thane Eugene Cesar, the Security Guard who was standing behind Kennedy and in the perfect position to deliver the shot that killed RFK, worked for Maheu. What as a CIA operative, who publicly admitted his disdain for Kennedy, doing standing behind Kennedy, holding a gun, and lying to authorities about his gun when interviewed?

None of these facts were known at the time of trial, and thus were not raised.

Sirhan Bishara Sirhan was found guilty of first-degree murder and sentenced to death. While he was on death row, California abolished the death penalty, and commuted his sentence to life in prison, where he remains. Attorney Lawrence Teeter was fighting for a retrial at the time of his own death in 2005.

Fifteen subsequent efforts to parole him failed, until August 27, 2021, when his new counsel, Angela Berry, argued for parole and the Board of Parole for California Department of Corrections and Rehabilitation recommended him for release.

See also AmericaTruthNow.org for more details on the trial and return her as our site is supplemented